Industry leaders are warning that pressures on the North American container shipping system are rising, risking even greater congestion in the beginning of 2021. In November, East Coast ports were challenged with handling a 30 percent year-over-year increase in imports from Asia, but have so far been able to avoid the gridlock that is gripping the ports of Los Angeles and Long Beach.

We are now seeing bottlenecks beginning to form outside Southeast ports, which until now have maintained fluidity. Sign of delays are noticeable with cargo stacking up at nearby warehouses, truck capacity tightening, and chassis dwells lengthening, Uffe Ostergaard, Hapag-Lloyd’s president, Americas, told JOC.com in a Tuesday interview. “Average turn times and berth productivity at major US ports are under pressure, reflecting increased strain on the container shipping system,” said Ostergaard.

“It’s a different narrative here,” Sam Ruda, director of the Port Authority of New York and New Jersey, told JOC.com Tuesday, although there is tightness throughout the New York-New Jersey supply chain, including mounting container dwell times at marine terminals and chassis dwell times at warehouses.

The situation remains very fluid. We are advising clients to do the following:

If you have a question about whether your products are affected by these delays, WB Skinner may be able to help. We can tell you what impact the delays might have on your shipments, and might be able to suggest a few options to help you to avoid delays.

Once again, the Generalized System of Preferences Act (GSP) will be expiring on December 31. With no Congressional authority for renewal in sight before then, importers should be prepared to act as usual during the lapse.

The GSP Act, which provides duty-free treatment to importers of goods from designated beneficiary countries, periodically expires and must be renewed by Congress. All previous GSP renewals that have taken effect after a lapse have had a retroactive clause that provided refunds to importers of eligible goods imported during the lapse period.

What Should You Do?

Until the Act is renewed, WB Skinner encourages you to continue to flag GSP-eligible importations with the SPI “A” designation even as you pay normal trade relations (column 1) duty rates on otherwise GSP-eligible importations.   Refunds will be done directly by CBP, which this year is working towards automating the refunds to enable quicker payment.

If you are a current client of WB Skinner, you will receive your refunds automatically. Contact us for more information.

If you are not a current WB Skinner client, contact us to find out how to receive your refunds.

If you have any questions about your shipments, from how to ensure their safe and effective delivery to ensuring the most cost-efficient procedures, you can count on us to help. And we guarantee you will be greeted by one of our experienced partners, not shuttled off to a junior associate or a voice mail.

Check back at wbskinner.com for updates or contact us for more information. 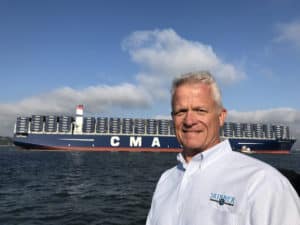 Amid the continuing devastation and recovery efforts in the Houston area, the region’s transportation impacts are also being felt across the country.

Ports in Corpus Christi, Freeport, Galveston and much of Houston are closed, pending further assessment of weather conditions. It’s estimated that nearly 10% of trucking across the U.S. will be affected by the storm during this first week.

The region has experienced days of heavy rains, strong winds and catastrophic flooding since Harvey made landfall Friday night. According to Fox Business News, seaports have been closed to most ships since Friday, and rising waters threaten stretches of highways and railroad tracks, bringing freight transportation to a virtual standstill.

It is uncertain when freight companies will resume operations. Even after the weather clears, it could be days before floodwaters recede enough to allow dockworkers back into ports, or trucks to resume normal routes.

Numerous ships scheduled to stop in Houston, including oil tankers, cruise ships and container carriers, are anchored well outside the storm’s path in the Gulf of Mexico. Port Houston appears to have avoided major damage, but some carriers said they could be waiting offshore even after the weather clears because flooded roads will keep dockworkers from reaching the port, or trucks from carrying cargo out.

The storm’s impact is expected to quickly affect the rest of the country.

If you have any questions regarding your shipments during this crisis, please contact Bill Skinner at 201-644-7214.

New standards for toys and related products such as toy chests were published by the U.S. Consumer Product Safety Commission (CPSC), effective April 30, 2017. If you are a new importer of toys you should be aware of these regulations and what they mean for your business.

The new rules, known as ASTM F963-16, were developed by the American Society for Testing and Materials and contain substantial changes from earlier versions.

All importers as well as U.S. manufacturers of children’s products are required to issue a “Children’s Product Certificate” based on passing test results from a CPSC-approved third party laboratory. They also have a legal responsibility to report if a product is defective or presents potential hazards. For more information on the requirements CLICK HERE.

There does appear to be some discretion allowed within the enforcement of the standards. In the earliest example since the announcement of the new standards, the CPSC agreed to issue exemption in March for certain projectile toys with low energies at the request of the Toy Industry Association.

Importers are urged to become familiar with the new standards and of course, to seek more information if they are unclear about the implications. W.B. Skinner is pleased to offer assistance with these or other regulations that you may have questions on.

Welcome to WordPress. This is your first post. Edit or delete it, then start writing!